What is aortic valve replacement (minimally-invasive)?

Minimally-invasive aortic valve replacement (MIAVR) uses a much smaller incision compared to traditional aortic valve replacement methods, which means patients recover much faster and the scar post-surgery is noticeably smaller too. MIAVR is used to treat patients with narrow or leaking valves who often complain of chest pains or shortness of breath. The technique is similar to that of keyhole surgery. Previously, surgeons used to have to split open the whole breastbone to have access to the valve and it would take several months for the wound to heal. Now patients recover more quickly, reduce their length of stay in the hospital and it reduces bleeding so not so much blood is transfused. 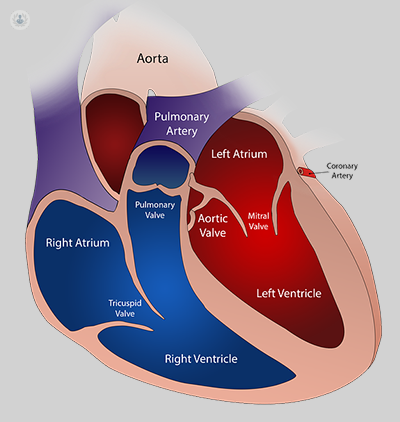 Why is it done?

These faults with the valve can result from:

For both of these conditions, you may have experienced the following symptoms:

What does it involve?

After being anaesthetised, the surgeon makes a small incision of 5-7cm in either the right-hand side of the chest close to the sternum (the breastbone), or between the ribs on your side. If special instruments are used to perform the surgery, several small incisions will be made. Sometimes, robotic instruments will be used to perform the surgery. You will be connected to a heart-lung machine which acts as your heart and lungs during surgery. Next, the aortic valve is removed and replaced with a new one. After the incisions are closed, you will be moved into a post-operative room or ward.

How do you prepare for minimally-invasive aortic valve replacement?

Before the operation, you will have had a thorough examination, as well as an ECG, blood tests, an echocardiogram, a chest X-ray and a coronary angiogram. Additionally, the surgeon will have to determine what type of replacement valve should be used. You can either use an artificial valve which require life-long blood-thinning medication. You could alternatively have a biological valve, sourced from pigs, cows or human hearts (organ donors).

Your surgeon will explain when to stop eating and drinking before surgery. You may also have to stop taking certain medications before the procedure. This procedure involves you being put to sleep with general anaesthesia.

Following surgery you will be closely monitored in an intensive care unit (ICU). You may be connected to a ventilation machine to help with your breathing. You will also have a chest drain tube to drain excess fluid and air from the operative site. After a couple of days some dressings will be removed and replaced. You can normally sit up in a chair a few days after the procedure, as well as walking with assistance. You can usually leave the hospital 3-5 days following surgery. You will usually have a follow-up appointment a week later to discuss your progress and to remove stitches. It is important to take it easy following surgery, and avoid strenuous activity for at least several weeks.

Alternatives to this treatment:

The alternative to minimally-invasive aortic valve replacement is open surgery. This can involve the rib cage being removed in parts to gain access to the chest cavity. This is major surgery, with much longer recovery times with more pain and scarring.

Any cookies that may not be particularly necessary for the website to function and is used specifically to collect user personal data via analytics, ads, other embedded contents are termed as non-necessary cookies. It is mandatory to procure user consent prior to running these cookies on your website.